Thanks Ed for another good letter 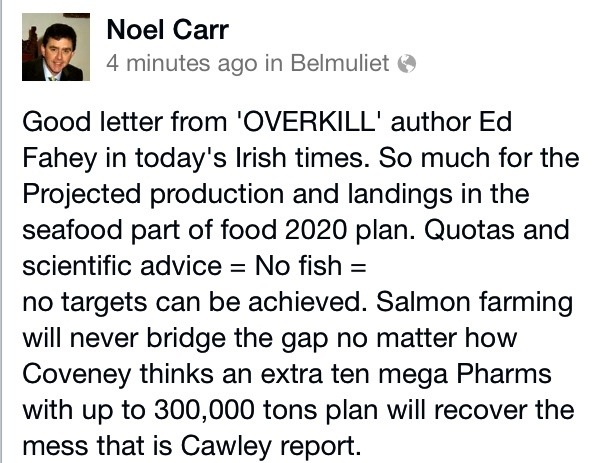 Sir ÔÇô Despite Minister for the Marine, Simon CoveneyÔÇÖs reassurance, marine fishing opportunities worth Ôé¼250 million (Home News, December 18th) are anything but ÔÇ£steadyÔÇØ. The value of seafish landings peaked at Ôé¼352 million in 2001. Allowing for inflation, that figure has halved in the meantime. The value of our marine produce is currently much the same as it was in 1973 when Ireland entered the EEC, before fleet expansion all but obliterated our whitefish fisheries. We now enjoy an enormous fleet which has less and less to harvest.
Sadly, the Minister was, on this as on previous occasions, unwilling to act in accordance with scientific advice and we can anticipate further reductions in the value of this industry as well as the volume of landings in the years ahead. ÔÇô Yours, etc,